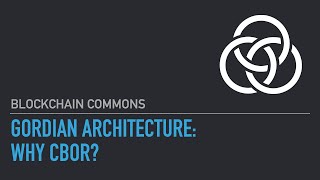 As part of this mission, we have decided to use the IETF CBOR (Concise Binary Object Representation) standard in our specifications, including Gordian Envelope.

We chose CBOR as our serialization format choice for several key reasons:

In summary, the choice of CBOR as the serialization format for Blockchain Commons allows for the development of technical specifications and tooling that are easily adopted by developers and can help solve common problems with decentralized, secure, private, and independent hardware and software. We’ve found that CBOR is the best choice for our needs, and we are confident that it will continue to serve our community of developers and supporters well into the future.