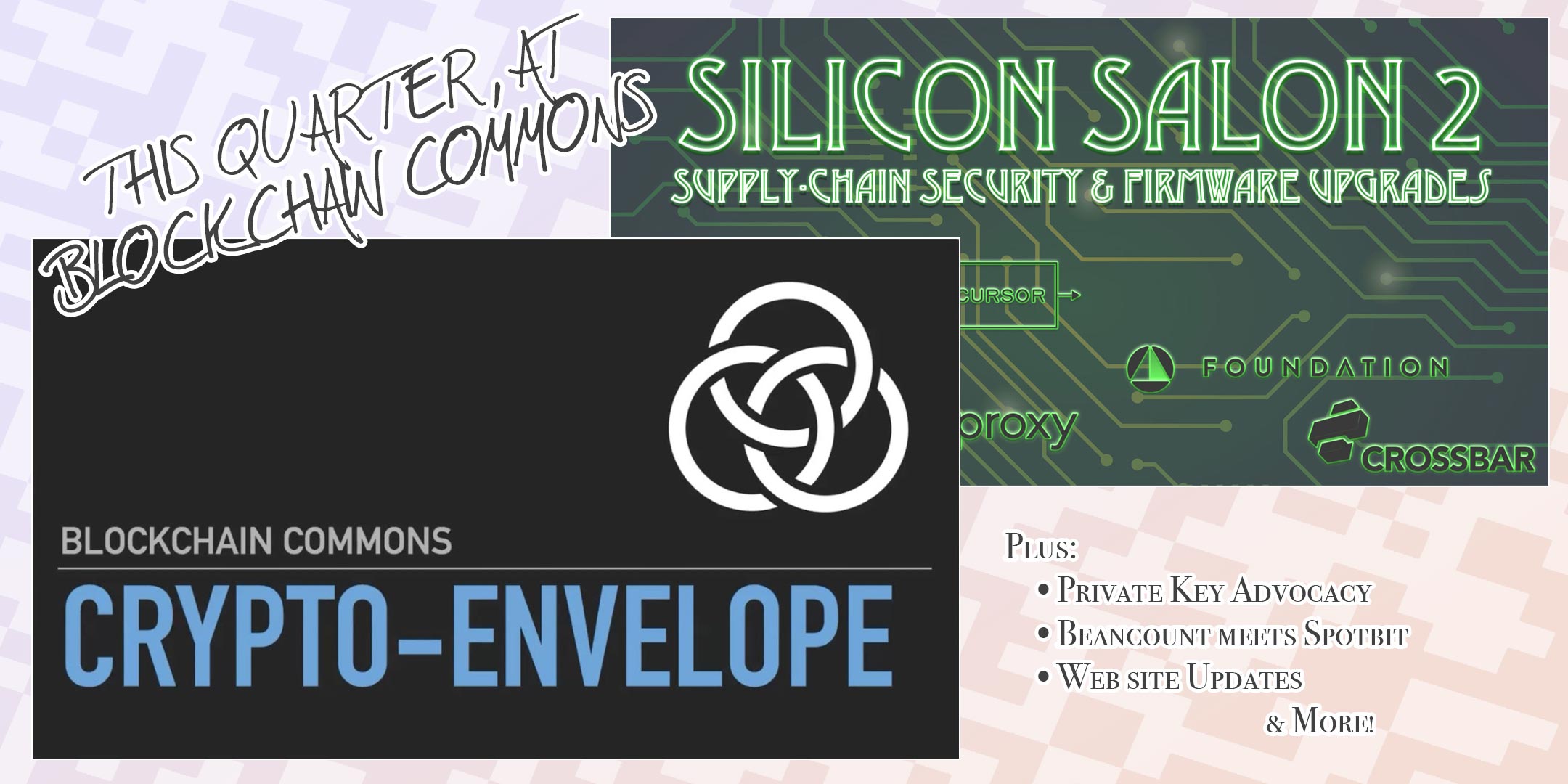 It’s been another busy quarter at Blockchain Commons, with a focus on new foundations, created in coordination with our community.

Much of our work in Q3 has been forward-thinking, focused on creating the next generation of specifications for blockchain interoperability.

Hello to the Identity Community. Being able to create the next generation of specifications depends on having a wide-spanning community, and we’ve been thrilled to see the Blockchain Commons community continue to grow. That includes not just cryptocurrency nowadays, but also digital identity thanks to sustaining sponsor Proxy. We also reached out to more digital-identity companies at this year’s Rebooting the Web of Trust event, and hope to see that pay out in the near future. 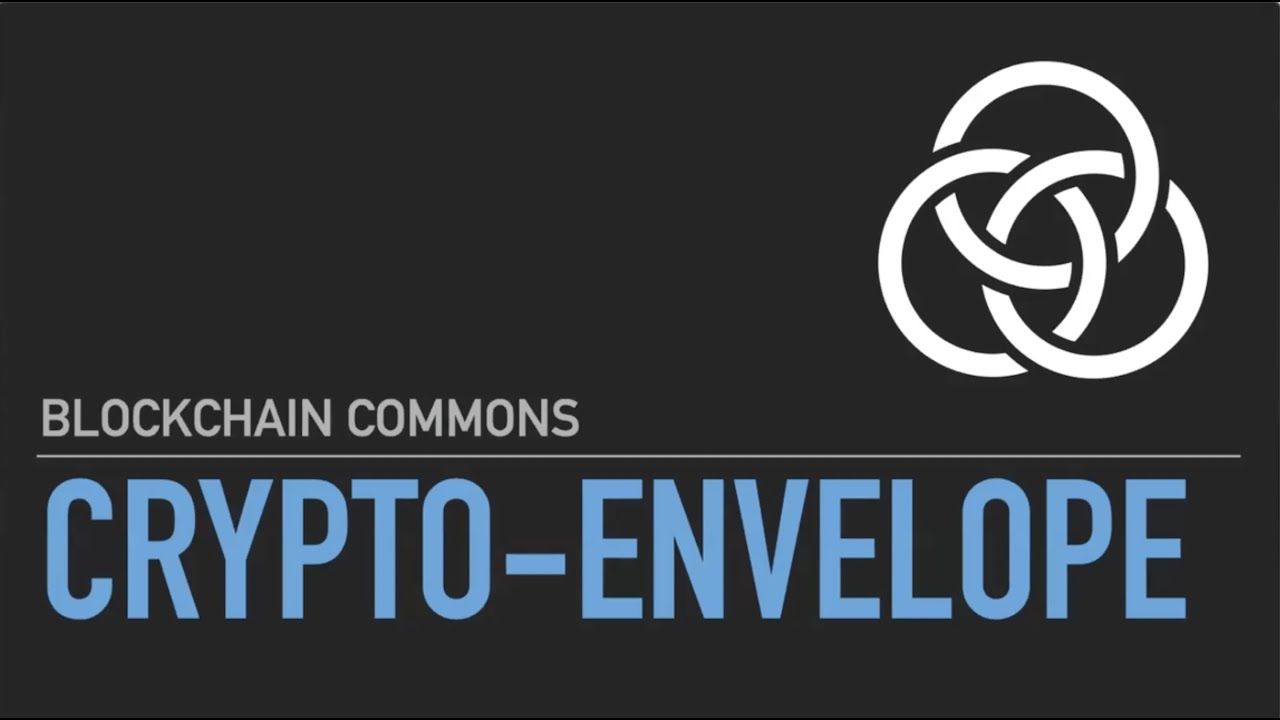 Gordian Envelope. Our specification work is intended to build firm foundations. Our newest foundational work of this sort has been on Gordian Envelope, a new sort of “Smart Container” that can be used to hold secrets and metadata of an arbitrary size and that can be opened by a variety of “permits”, including SSKR shares and public-key cryptography keypairs. Extensive docs are now available as part of our BCSwiftSecureCompanents package. Also see our Gordian Envelope videos on our YouTube channel.

MVA Algorithm Suite. The appendix of the Gordian Envelope docs contains our first MVA ALgorithm Suite. This refers to the algorithmic suite we’ve decided to use in our Minimal Viable Architecture: effectively a future-proofed Minimal Viable Product. It overviews current cryptographic algorithms and discusses our decisions about which to use. Gordian Envelope uses BLAKE3, IETF ChaChaPoly, the secp256k1 curve, and more. Our Appendix talks about why we think they’re the best practices for this project.

Collaborative Seed Recovery. This new foundational work is largely in service to Collaborative Seed Recovery (CSR): we intend it to add independence, resilience, and openness to seed storage by allowing digital-asset holders to shard their seed and then store it with a variety of different steward services, making recovery painless and resilient. We are currently working with a companies such as Bitmark, Foundation, and Proxy in regular biweekly meetings to make CSR a reality this fall. For more, please see our CSR Overview. Our Gordian Envelope videos also lay out the whole foundation, so take a look at the combined CSR playlist.

CSR Use Cases. Why is CSR needed? We’ve written several sequences of progressive use cases in a preliminary document that discusses options both for CSR and its 2023 successor, Collaborative Key Management (CKM). It covers everything from simple protection of keys to future possibilities where no one actually holds a complete seed, despite its keys being in active use.

Preventing vendor lock-in via interoperability has been a Blockchain Commons goal from the beginning, but that requires bringing together multiple parties to buy into interoperable specifications. The growth of Blockchain Commons’ community of developers, sponsors, and other interested parties in 2022 has truly made that possible, with those parties coming together in community events such as the biweekly CSR meetings and others.

Silicon Salon 2. Our other ongoing get-together this year has been the Silicon Salon, where we’ve facilitated wallet makers and semiconductor makers talking about the creation of the next generation of silicon design that is specialized for cryptography. Our second Silicon Salon was held on September 14th. Presenters included Bunnie Studios, Cramium Labs, Proxy Labs, Foundation, and the VLS team.

RWOT11. Blockchain Commons got its start with Rebooting the Web of Trust, where Christopher Allen first brought community members together to support the future of decentralized and self-sovereign technologies. Unfortunately, Rebooting the Web of Trust went on hiatus shortly after the foundation of Blockchain Commons, due to the COVID-19 pandemic, but it was back this September.

Blockchain Commons submitted two papers for RWOT11, to bring some of our topics into the conversation in the Netherlands: an introduction to CSR and Elision, Redaction, and Non-Correlation in Smart Documents. The elision topic paper led to a discussion of Selection Disclosure that we’re looking forward to finishing in the coming months. We also participated in an article on Identity Threats, which returns to some of our early identity work in the field!

Congrats to DIDs. We can’t talk about RWOT without congratulating everyone who worked on turning DIDs into a standard. This has been a long-running goal for both RWOT and Blockchain Commons, so we were thrilled to see DIDs become a W3C Recommendation this July.

We have also continued work on some of our smaller projects:

Beancount. Beancount is a simple program that allows double-entry accounting from text files. Because of its textual foundation, it’s very convenient to use in conjunction with command-line Bitcoin tools. As it happens, this type of tool is also crucial to Bitcoin because of regulatory decisions in the US treating Bitcoin as property, not currency, meaning that capital gains need to be calculated for every transaction(!). This requires careful accounting of your Bitcoin, and to support that, we’ve updated our SpotBit server to also include a script called beancounter.py that will take a descriptor, look up historical prices via SpotBit, and thus provide all of the data an accountant will need to properly report Bitcoin purchases, sales, and usages. We’ve iterated the software a few times during the quarter, and think we might have a final version; watch for some documentation on the process in the coming quarter.

SpotBit. We’ve actually had a few recent updates to SpotBit, primarily to improve the look, feel, and design of its webpages. Thanks to 2022 interns who supported in this upgrade.

The work that Blockchain Commons does on specifications, leading to libraries and reference apps, is bottom-up: we work with developers to incorporate specifications that meet our vision of independence, privacy, resilience, and openness. However, we also do top-down work, where we advocate for this vision to lawmakers, agencies, and other organizations.

Law & Advocacy Repo. To better highlight this work, which was also well-supported by our 2022 interns, we’ve added a Law & Advocacy repo to GitHub, to report out much of our work. It includes a list of Terminology & Definitions produced by this year’s interns, and links to other work.

Private Key Disclosure. That work includes our new article advocating for protection for private keys in courts, which was published by Bitcoin Magazine. In recent years, courts have begun to request private keys as part of pre-trial discovery motions. It’s dangerous and unnecessary and it needs to end, as is now being considered in Wyoming, where Christopher Allen continues to give regular testimony. Fortunately, the proposed law in Wyoming to protect private keys from disclosure has recently passed a select committee and moved on to others. It still has a ways to go though!

Blockchain Commons’ third birthday passed without mention this Spring. But, that span of time since our foundation is probably why we’ve been doing a bit of work cleaning up our web presence, to make sure it accurately reflects where we are today! 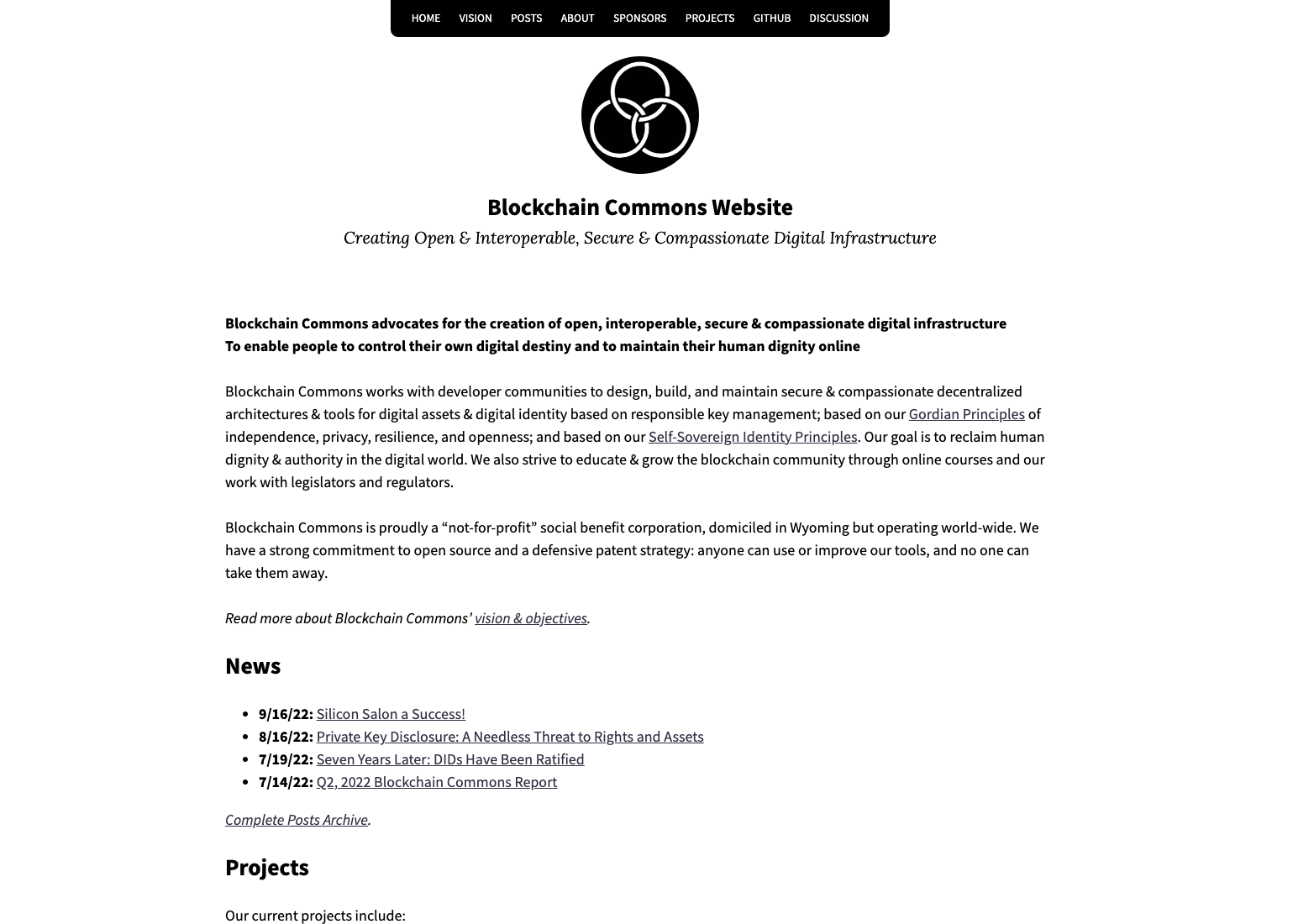 Vision Page. We’ve long known the goal of Blockchain Commons: to make it possible for people to control their own assets and information on the internet, using the decentralized power of blockchain technology. We slightly revised how we write about that vision this quarter. Our newest statement combines two previous statements to say:

“Blockchain Commons advocates for the creation of open, interoperable, secure & compassionate digital infrastructure to enable people to control their own digital destiny and to maintain their human dignity online.”

Projects Page. You may also want to take a look at our updated Projects Page. We’ve done a lot of different work over the last three and a half years. Our updated projects page now highlights what we consider most important to our vision, beginning with the Gordian System.

Airgapped Community. Though we continue to believe strongly in partitioning services to encourage the Gordian Principles of independence, privacy, resilience, and openness, that’s today much bigger than the airgaps that we were considering several years ago. As a result, we’ve transformed the Airgapped Wallet Community into the Gordian Developer Community. We choose the name “Gordian Developer Community” for this update because the Gordian System today incorporates all of our developer-focused work, from Principles and Architecture to Specifications and Libraries, plus the Apps that demonstrate them. We look forward to talking with airgapped-wallet developers and those working on other partitioning techniques alike!

As part of our web updating, we’ve also done some work on our docs.

Thank you as always for your support for Blockchain Commons. In 2022, we have truly become the commons that we imagined. Moving forward, we will continue to build firm foundations with our big focus on the architectural and reference work needed to release CSR by the end of the year.

If you’re not already a sponsor of our work, you can become one through GitHub. Now that we’re back from RWOT11 in the Netherlands, we’re looking forward to continuing to advance our work!