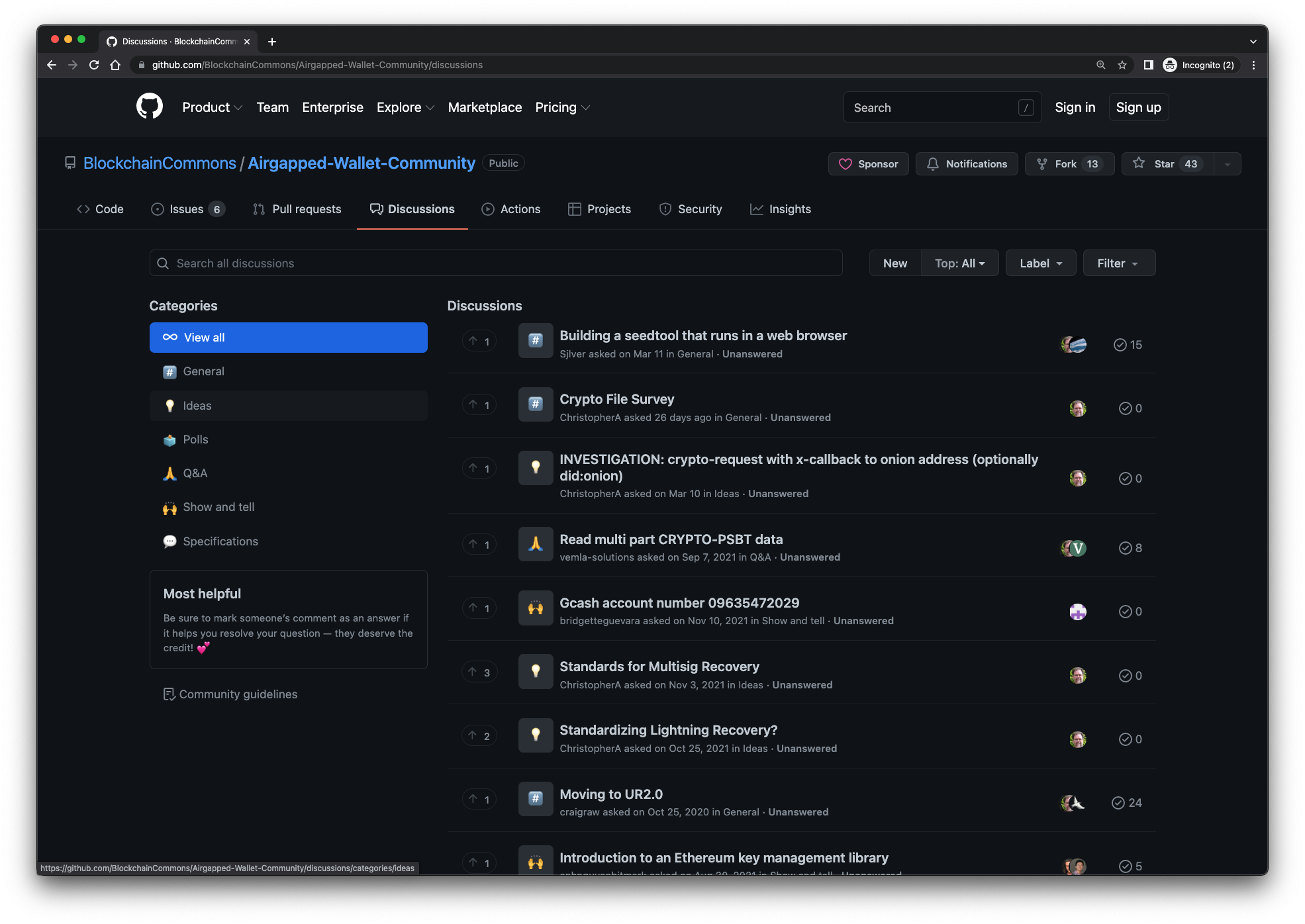 In Q1, Blockchain Commons achieved a variety of milestones, from the maturation of our community to the development of Smart Custody v2.0, from the release of Gordian Seed Tool 1.4 to the design of our next generation of specifications.

The first goal of Blockchain Commons is to create a community: an actual commons. We saw notable advancement on that objective this quarter, a positive sign that the commons is truly gelling.

New Patrons. We want to offer a welcome to our newest sustaining patrons, CrossBar and Proxy. Each of them brings exciting new opportunities to the commons: CrossBar with silicon solutions and Proxy with a long-time focus on identity. Continued thanks also to our existing sustaining sponsors such as Bitmark, Blockchainbird, Foundation Devices, and Unchained Capital and to our other supporters on GitHub.

New Possibilities. The variety of expertises within the commons is creating synergy for all of our patrons and other participants, as Blockchain Commons is able to introduce members to each other and work with everyone to develop use cases and specifications that meet all of their needs. In particular, as a result of CrossBar joining our community we’ve been hosting dialogues about the future of secure silicon: what features it can support, and what other possibilities the future holds. We’ll be expanding on that in the near future with a virtual salon.

New Contributions. Q1 also saw an entirely independent software contribution. Jonas Wagner created seedtool.info, a version of our seedtool-cli that is accessible via the web and built using WebAssembly (as opposed to less secure JavaScript implementations). We appreciate the contribution and how it improves the accessibility of seed usage, but even more we appreciate Jonas’ interest in becoming part of our open-source community. (Thanks Jonas!) We look forward to more contributions of this sort. 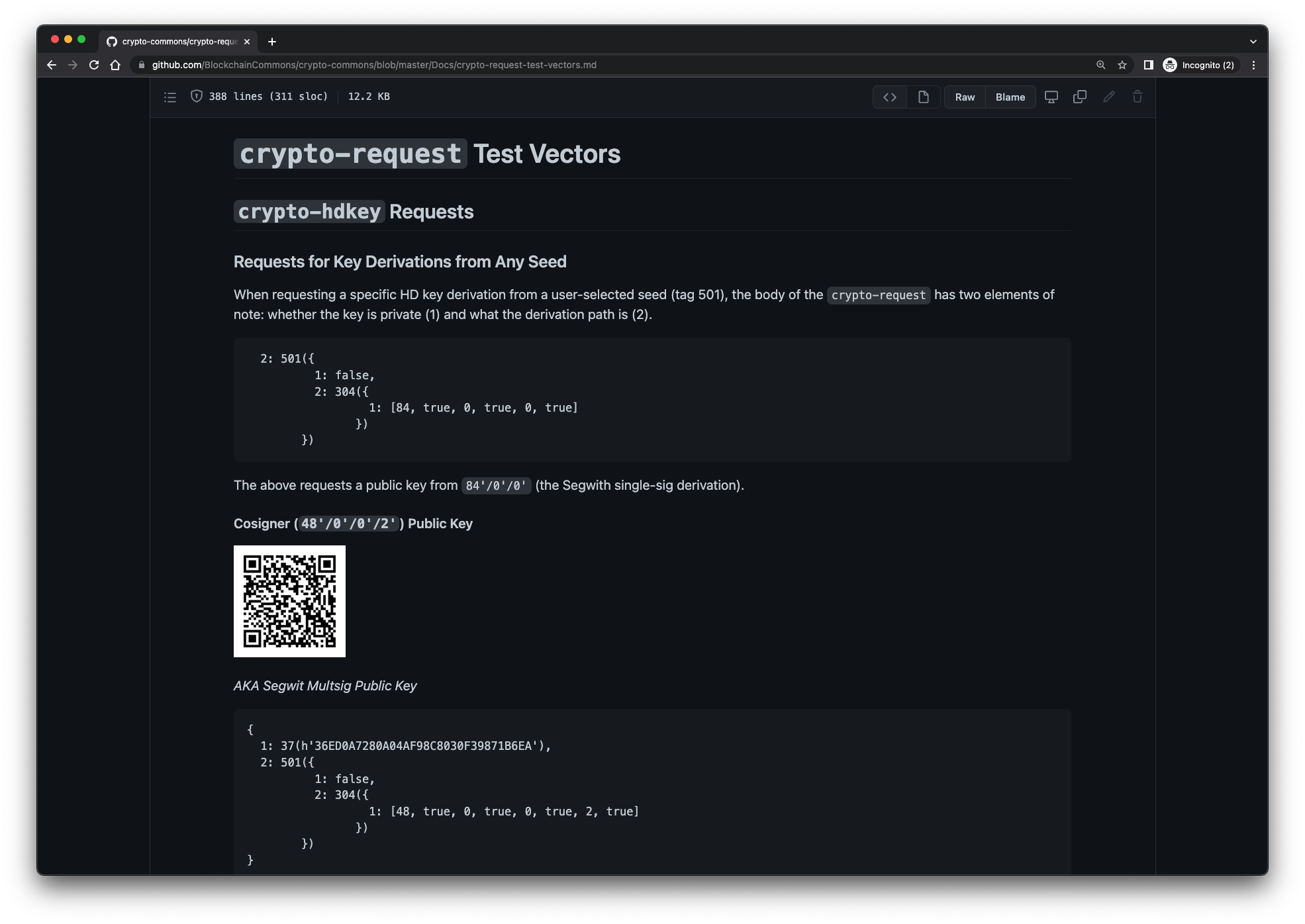 By working with the commons community, we’re able to not just discover the needs of our members, but also develop specifications that both serve those needs and help our members to interoperate.

New Specifications. We have begun work on two new specifications. crypto-msg is a simple encoding of ciphertext that we’ve specced out in a first draft. We’ll be seeking CBOR registration via IANA for it once we’ve finalized. crypto-envelope is a more complex specification that can contain crypto-msgs, decryption methodologies, and more; it’s still being sketched out based on community needs.

Test Vectors. Of course creating specification is just the first step. We also create reference libraries and reference apps that demonstrate their use — and ultimately test vectors, so that our community can test their own code. Our crypto-request/crypto-responses communication specification is now mature enough that the community needs test vectors, so we created more than a dozen, allowing for easy testing of requests and responses.

Reference apps are where specifications interface with the real-world, as we demonstrate their actual usage.

Gordian Seed Tool v1.4. Gordian Seed Tool, our iOS and MacOS seed vault, continues to be our prime reference app for demonstrating the Gordian Principles and for exemplifying best practices of seed management. Our new v1.4 features usability and data display improvements, but its biggest advancements were in I/O.

Seed Tool can now write to MicroSD cards, supporting a safe and secure way of exporting seeds without going to a network. This release also supports the ur: scheme for the native camera app and for reading NFCs cards. Our open test-flight beta also includes proof of concept of writing URs to NFCs if you want to experiment. (Beware: this functionality might change!)

Spotbit. Spotbit, our tor-gapped currency pricing lookup tool, was one of our biggest successes from our 2020 intern program, but we’ve long wanted to improve its stability to make it usable not just as a reference but also as a real service. Work on refactoring has just begun, courtesy of one of our former interns (which also demonstrates another of our goals: increasing the number of designers and developers in our industry). 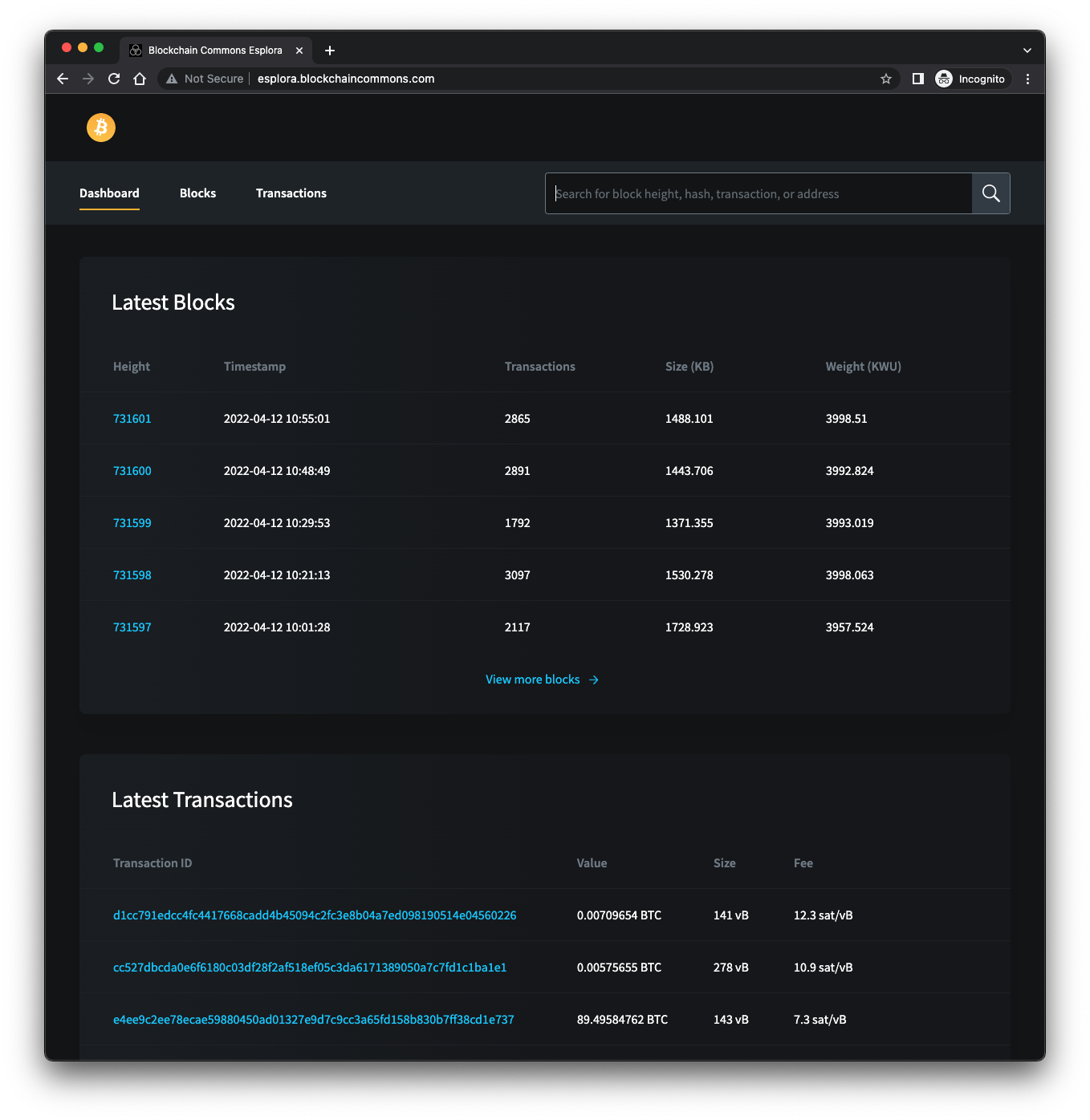 Though one of the largest goals of Blockchain Commons is working with developers to craft the open, interoperable, secure, and compassionate digital infrastructure of the future, we’ve also constructed a bit of that infrastructure ourself by providing public services.

Esplora. We now have our own copy of Esplora, the blockchain explorer, available at esplora.blockchaincommons.com or http://pf4awrbzt3ohrtukpq6xx6y73gxqlnon4zh35ik7ald3kwfb5iedogad.onion/ on Tor. This is meant to be a stable, publicly accessible blockchain explorer, so that Blockstream’s original esplora isn’t a single-point-of-failure for blockchain explorations of that sort. We’d love for more people to run their own Esplora services as well, to offer distributed sources of blockchain truth. 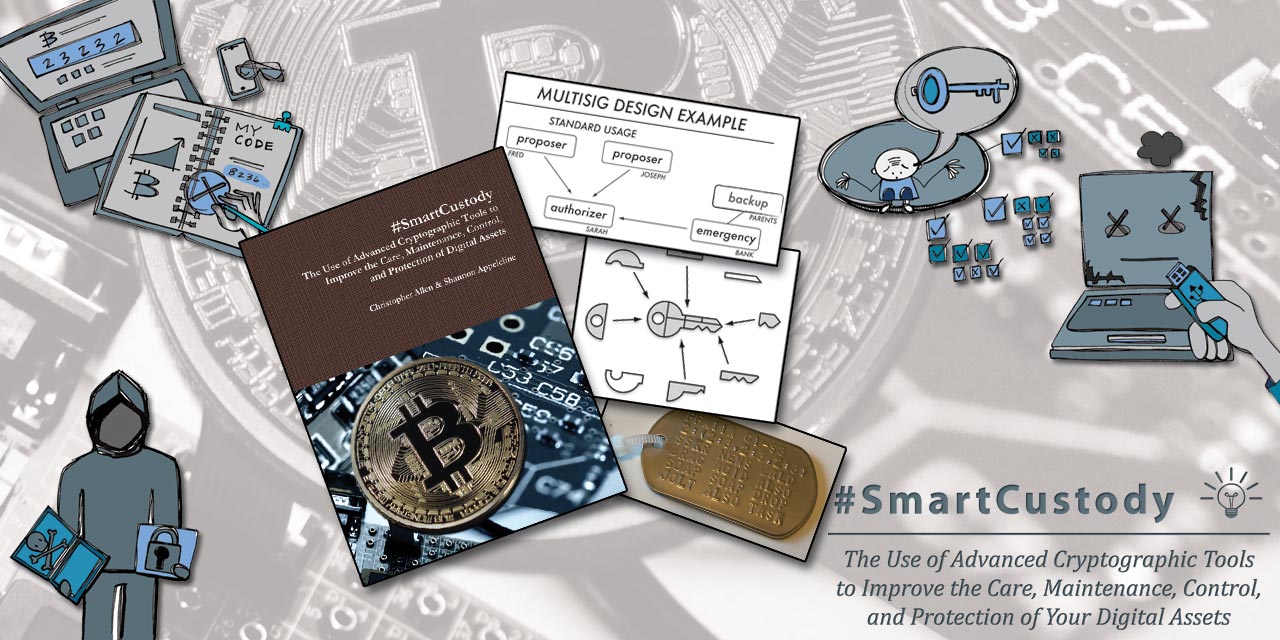 One of Blockchain Commons’ first projects was advocating for the Smart Custody of digital assets by outlining best practices that could equally be adopted by individuals or incorporated by developers into their works. This quarter has seen some large advances in our smart custody work.

Smart Custody for Multisigs. When we designed our original Smart Custody scenario, we were already thinking about multisigs, but the technology wasn’t yet accessible to anyone but the most sophisticated user. So, our original scenario focused on cold storage. Fortunately, three years later, multisig is much more easily available through a number of transaction coordinators, some of them self-sovereign, such as Sparrow Wallet. We’ve thus been thrilled to put together a raw draft of a complete scenario focused on using a multisig to protect your digital assets. It allows for control of digital assets that’s less prone to failure, less prone to compromise, and easier to use: everything that a SmartCustody scenario requires. The draft is still undergoing review, so this is just a preview. We expect to release it fully in the coming quarter.

Smart Custody Case Studies. We’ve also been thrilled to see an increasing number of hardware and software releases that embody Smart Custody best practices. To discuss them, we’ve begun producing case studies that talk about how each fulfills the Gordian Principles and battles against Smart Custody adversaries; in the process, we’re also coming to better understand the needs of our community members. Our initial case studies cover the Foundation Devices Passport and Sparrow Wallet. We also published discussions of how our own Gordian Seed Tool acts as a reference for Gordian principles. We’ve got one more case study in process for the Keystone Pro wallet. If you’d like us to consider other products, or even better if you want to draft a case study yourself, please contact us at team@blockchaincommons.com.

Proof of Personhood Support. Smart Custody, and its adversaries, goes beyond just the ownership of cryptocurrency. We recently hosted a discussion with the proof-of-personhood community, who we’ve long worked with at Rebooting the Web of Trust, and came up with one new adversary, a boundary breaker, which can likely be applied to #SmartCustody proper. There are no easy answers to the problem of proving whether an entity is a real person, but we think the problem is solvable, and we look forward to working more with this community.

Looking torward the future, there’s lots more on the horizon.

Rebooting the Web of Trust. We are thrilled to see the return of the Rebooting the Web Design Workshops this Fall, after a break of three years due to the COVID pandemic! They’ve recently announced a save-the-date for September 26-30, when the next workshop is planned for The Hague in Netherlands. RWOT was in many ways the foundation of Blockchain Commons, so we’re looking forward to returning this year to learn more about everyone’s current interests and needs.

Self-Sovereign Identity. Working with governments to support self-sovereign identity has long been a goal at Blockchain Commons, with much of our focus on Wyoming. However, the ideas are spreading far and wide. Recently we talked with the Buenos Aires Mayor’s office about creating identities that benefit the people, not corporations. This is part of a real effort, as they’ve already produced a white paper on the topic, which is available in translation.

Ethereum & NFTs. At this point we’ve written three different unpublished documents on creating Smart Custody for Ethereum, for NFTs, and for treasuries. We’re still deciding how to advance this work, as it’s a big job that would require serious support, but if any our patrons want to see our initial notes, please contact us.

2022 Interns. Blockchain Commons has announced its 2022 intern program, to run this summer from May 23, 2022 to August 15, 2022. We’ve also produced a list of potential projects that includes many of our own ideas. If you’re interested in dedicating 40 hours of work this summer as an intern, please apply! The deadline is April 22nd. Even if you don’t want to become an intern, take a look at our projects list, as we’d be happy to work with independent open-source developers on anything there.

The Silicon Salon. This May we’ll be working with CrossBar to host The Silicon Salon, a 90-minute virtual discussion on the future of secure silicon. We’ll be talking about the possibility for support of secp256k1 and other curves as well as what other features could be included in silicon designs, from hashes and key derivations to ideas about more advanced functionality. Watch @BlockchainComns for our official announcement.

What’s Coming Up? We’ve got lots of big plans for things that we’d love to advance in the new year, but which will ultimately depend on the needs of the community (and our own resources).

Our future educational work includes expansion of our two biggest projects in that category. Learning Bitcoin from the Command Line should be updated for Taproot and Schnorr, and we’re looking even more forward with MuSig and both the benefits and challenges it’ll bring. We’d similarly like to bring our Smart Custody work to the next level, not just incorporating our last year’s work on multisigs, SSKR, and timelocks (as well as our new scenario), but also expanding Smart Custody to support Ethereum, Tezos, and other blockchains.

Beyond our educational work, we’ve also been considering the design of a Gordian Recovery reference app and need to finalize our work on new specifications such as crypto-msg and crypto-envelope. Of course, we expect the year to be further defined by the needs of the blockchain community! So, there’s plenty to look forward to!

As always, if you are interested in the work of Blockchain Commons and want to see it continue forward, the three best things you can do are become a sponsor, become a community member, and offer your own contributions as Issues, PRs, or even entirely new projects.

Thank you for your support!